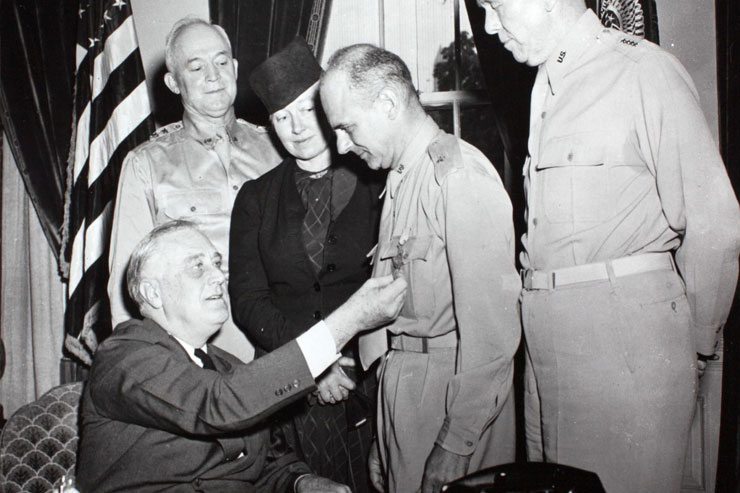 The question remains, did former President Roosevelt have Polio or a Peripheral Neuropathy known as GBS and why should we care?

In August 1921, at the age of 39, while vacationing at Campobello Island in Canada, soon to be President Franklin D Roosevelt contracted an illness characterized by the acute onset of symptoms over a period of days, characterized by fever, protracted symmetric, ascending paralysis of the upper and lower extremities; facial paralysis; bladder and bowel dysfunction; numbness; and dysesthesias (abnormal sensation often painful).   Given the clues of sudden acute onset of symptoms and a fever, these symptoms however left an unanswered question.  Was it Polio or GBS a Peripheral Neuropathy?

A peer-reviewed study published in 2003, found that six of eight posterior probabilities favored a diagnosis of a Peripheral Neuropathy known as Guillain-Barré Syndrome (GBS) over poliomyelitis. The diagnostic importance of the spinal tap will be shared later, but first, what is GBS?

Guillain- Barré Syndrome is an acute form of peripheral neuropathy attacking the peripheral nerves in a short period of time. As sometimes happens, but not always in GBS, the President’s symptoms gradually resolved except for paralysis of the lower extremities.

FDR is a bigger than life person and his contributions are beyond measure during a critical period in U.S. history. However, given former President Roosevelt’s medical diagnosis in 1921, neuropathy patients are lead to ask, are we putting more patients at risk because medicine too often fails to completely diagnose and treat the peripheral neuropathies in 2015?

It is common knowledge that there are estimated to be over 20 million neuropathy patients and too many are still not getting the help they need.   While we have made significant progress in raising awareness and developing tools for diagnosis and some possible treatments, many of these patients are at risk for the development of severe disabilities if left undiagnosed and untreated.  They too often suffer untold nightmares within their own bodies, because of the remaining lack of awareness, poor attitudes which fail to take the neuropathies seriously, coupled with limited clinical training and resources to adequately diagnose, interpret the tests and treat the neuropathies.  Too many long held assumptions about neuropathy stand in the way of the doctor’s ability to let loose critical thinking when working with a neuropathy patient.

This leaves millions of neuropathy patients without a diagnosis, without treatment, and with little hope for a disease that can be anywhere from a painful or non-painful nuisance or a mind numbing challenge to daily living, to a potentially life-altering disease with severe disabilities.   Some of the immune mediated neuropathies may even turn deadly.

In 1921 knowledge of Guillain Barré Syndrome (GBS), a peripheral neuropathy was not widely known among medical professionals. GBS was seldom diagnosed or treated let alone the many other forms of chronic neuropathy or the immune mediated neuropathies during these years.   (Immune mediated neuropathies involve the malfunction of the body’s immune system which attacks the peripheral nerves throughout the human body).

So this brings us to the question, how could FDR been properly diagnosed?

Today, scientists note that without a spinal tap which may have been diagnostic of GBS for the former President, the question must remain open without a definitive answer, as a spinal tap is now impossible.

The analysis of the cerebral spinal fluid (CSF) via what is called a lumbar puncture or spinal tap is important as a diagnostic tool for it reveals the levels of protein and other helpful information from the analysis of the spinal fluid, which is very important as a component of diagnosis in the immune mediated neuropathies. (Textbook of Peripheral Neuropathy by Peter D. Donahue MD FAAN Editor, DEMOS Medical Press, 2012, Drs. Ulane and Brannagan, chapter 13, page 191 and Drs. Menze and Burns, chapter 12, page 168.)

However, here is the point. If in 1921 the physicians did not do a spinal tap which by many current neurological experts may have been diagnostic of Guillain Barré Syndrome or Chronic Inflammatory Demyelinating Polyneuropathy (CIDP) or one of the many immune mediated neuropathies or variants, why do too many practitioners continue to fail to mention or use this diagnostic tool today?

The value of the spinal tap is not mentioned as a diagnostic tool in an article titled, “How to Diagnose Peripheral Neuropathy? No Simple Answers: Experts Offer Some Guiding Principles” by Mark Moran (Neurology Today, 15 March 2012, Vol. 12(6); pp 30, 32-33). Why?

Granted diagnosis of the neuropathies, as the article notes, is often a mind numbing challenge due to all the many causes and types of neuropathy. Yet this question is very important to patients who have peripheral neuropathy and who are far too often unable to get an accurate diagnosis.

Mr. Moran’s article includes comments from leading scholars who are committed to finding answers. But why is the spinal tap or analysis of the CSF not mentioned?  Throughout current medical literature the value of the spinal tap, more than the diagnostic value of a nerve/muscle biopsy, is diagnostically important when infection or inflammation are present or an immune mediated neuropathy is suspected.

Norman Latov, MD of Columbia University, in his book for patients, Peripheral Neuropathy: When the Numbness, Weakness, and Pain Won’t Stop, he notes that two of the clues for doing a spinal tap are infection or inflammation.  For President Roosevelt these would have been clues to a possible immune mediated neuropathy along with many other symptoms that are not common with a diagnosis of polio.

Today this is even more important, for as we learn more about these neuropathies, we find we know less and often the only clue is the patients’ medical history especially when all previous tests for other causes are negative. This is especially true if the neuropathy is a progressive polyneuropathy involving the autonomic nervous system and does not follow known patterns or clinically present in ‘expected’ ways.  It is these expected ways, while helpful on one level to the clinician, stand in the way of the important ‘whys’ and ‘I wonder’ of a critical thinker.

Colonel Richardson was asked “Why did they not do a spinal tap?” This did not happen until after he was put on a trial of IVIg and responded to this treatment in 2004. But a spinal tap was not even considered until after he was administered IVIg and not until he had developed severe disabilities following 34 years without diagnosis and treatment. Treatment with a trial of IVIg was suggested by a group of neurologists which included Dr. Brannagan in which was stated that a trial of IVIg should be considered under certain criteria.

Dr. Walter Bradley DM, FCRP, Professor of Neurology, Chairman Emeritus of the Department of Neurology, University of Miami, commented with great kindness and support to the Colonel upon mentioning this helpful article to which Dr. Bradley had contributed, that unfortunately, “The article was considered only medical opinion at the time.”

Medical opinion had failed the Colonel for decades, so why is it not valid in something that worked? One of the reasons is that the Colonel’s symptoms did not follow the ‘standard’ expected patterns of his immune mediated neuropathy.  Yet this is exactly why the spinal tap should have been performed.

While we have made some progress, too many physicians continue to run the standard tests for the neuropathies; stating that all tests are normal and either dismisses the patient or provide a rather unhelpful diagnosis of “idiopathic” neuropathy or of unknown cause.

We wonder how many men, women and even children; we will help from the debilitating effects of this too often under-diagnosed and under-treated condition by our united physician and patient efforts.   We wonder how many lives will be saved from going ‘south’ from the scourge of this horrible condition which affects the lives of over 20 million at a great cost to society.  We together have the answers in our hands while physicians and patients together can make FDR proud by providing increased hope through better tools for diagnosis and options for treatment for those who suffer with any Peripheral Neuropathy!

Final Observation: In the strange world of medicine and discovery, the possible misdiagnosis of FDR, who’s founding on January 3, 1938 of the March of Dimes, resulted in discoveries that stop the plague of Polio and its deadly effect on so many children! What better legacy could there be than this, for a great American, even with a possible misdiagnosis!